No more poor gas but rich gas that might prove costly

Natural gas consumers, you have been warned: by 2030, you will all be supplied with rich gas. Does the idea seems attractive to you? Unfortunately, in practice, it is not that attractive at all.

The news caused a raucous in the energy sector: soon, it will no longer be necessary to rely on natural gas imported from the Netherlands. Is this good news for Belgium? No, not really. Today, in our country, 1.6 million households are still dependent on this energy for heating and/or cooking. It may well be your case. Although the authorities have given thought to a plan to remedy the problem, it still has a cost. Especially for consumers.

Natural gas from the Netherlands; what is special about it?

One of the riches of the Netherlands has long been its Slochteren deposit, in the Province of Groningen. Thanks to it, the Kingdom has supplied several countries with gas, including ours, since 1966. With no natural gas resources, we are forced to import.

On this basis, our trade with the Netherlands is of course most welcome. That said, we also import this type of fuel from Norway, the United Kingdom or Qatar. These various collaborations allow us not only to meet the national demand, but especially to diversify our gas supply sources. This is an important precaution in order to be as energy-independent as possible, but which leads us today to a delicate situation: our network is supplied by two types of gas.

On the one hand, there is L-gas, from the Netherlands, representing one third of Belgian consumption. On the other hand, there is H-gas, from other countries. What’s the difference between the two? Their heat capacity. As H-gas contains more nitrogen than L-gas, it is classified as rich. And L-gas, therefore, as poor. As they cannot be mixed in the same pipeline, they cover different areas, as shown in the map below. 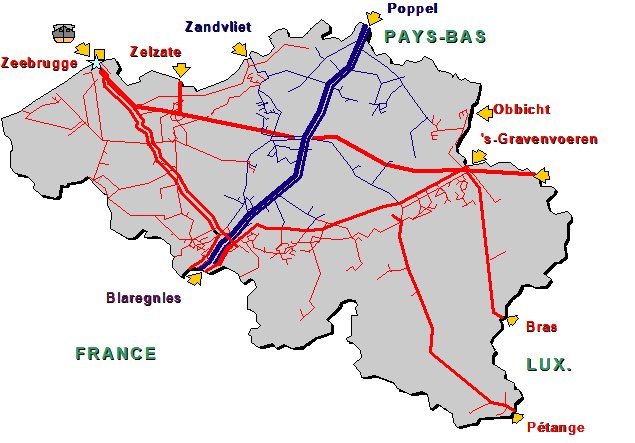 The problem? The Netherlands has announced the near depletion of its reserves resulting in the end of exports by 2030. Knowing that as of 2024 the country will slow down already, it is easy to imagine the lack of fuel in Belgium. Forced to avoid this, Belgium has therefore devised a plan to ultimately accommodate H-gas nationwide.

Substantial work planned throughout the duration

The solution? To adapt the hundreds of thousands of L-gas connections to H-gas. In practice, this means performing work on three levels:

Are you worried about the conversion from L-gas to H-gas?

In Belgium, one in two consumers is already supplied with rich gas. Specifically, customers who are not yet, are mainly located in the north of the country (122,000 connection points in Wallonia, one million in Flanders and half a million in Brussels). In detail, this is the whole of the Brussels Region as well as the Province of Antwerp, Flemish Brabant and Walloon Brabant. In addition is a part of Limburg and some municipalities of the provinces of Liège, Hainaut and Namur.

If you want to find out about your specific case, you will be delighted to learn that this is possible by entering your postal code on the site Gas changes. Set up especially by the FPS Economy and Synergrid, it includes a great deal of useful information for private individuals and professionals, such as the possible steps to take.

What costs will the affected consumers have to bear?

Concerning the technical costs related to changing from L-gas to H-gas, consumers should not, in theory, bear any additional cost. Fluxys and the distribution system operators have indeed already taken into account the work they will have to undertake in their investment plans. If the DSO operating in your municipality comes to your home to make an adjustment, do not worry: you will not have to pay anything. To finance other costs of adaptation, a national fund will be created but for now, we must admit that its implementation remains rather unclear.

However, customers will have to start paying at some stage. Indeed, it is the users who must call a technician to check their gas installations and therefore pay for the service. Similarly, if it turns out that one of them must be adapted, customers will have to reach into their wallets. According to the DSOs, this will involve a total cost of between 0 and 150 euros for one to three devices. Finally, in the event of an incompatible installation, the consumer will have to buy a new one. So, you should learn about regional aid and energy premiums so as not to strain your budget.