DATS 24 is a fuel specialist which has started supplying natural gas and 100% green, local electricity produced by Colruyt Group, a company with 21 years’ experience in supplying green electricity. 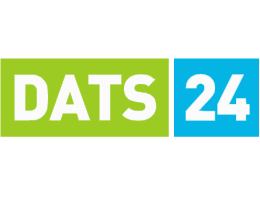 DATS 24, which stands for Discount Automatic Tanking Service, opened its first service stations in the 1970s in Colruyt supermarket car parks. The particular feature of these service stations, as their name suggests, was that they allowed automated refuelling, thus eliminating the need for personnel on site. To pay for their fuel, customers had to purchase a transaction card unique to Colruyt service stations. A bold idea at a time when payment by smart card was still in its infancy!

The service station network continued to expand until, in 2000, it had outgrown the Colruyt car parks. The service stations were pretty much everywhere. Seven years later, Colruyt took the plunge: it turned DATS 24 into a separate business, even though it was still part of the group. Over the years, the company invested in alternative fuel types, such as CNG and green hydrogen, to distinguish itself further from its competitors.

Now, in 2021, DATS 24 is embarking on a new venture: supplying natural gas and green electricity. To do this, the company has Colruyt’s renewable energy production plants at its disposal. Initially, it will only serve Flanders and Wallonia, with customer numbers limited to 134,000 households.

DATS 24 has established a simple, straightforward customer service operation that meets the needs of its customers. The company can be contacted by telephone (every day, from 7.00am until 8.00pm, and until 9.00pm on Fridays) or by email. Customers also have a dedicated space on the Xtra platform, which is also used by other businesses in the Colruyt Group.

Regarding billing, customers can pay by bank transfer or by direct debit.

Green electricity and natural gas in their simplest form

DATS 24 gets straight to the point with its minimal product range. It offers only three options:

Whatever your preference, the contract terms will be the same, in other words an indefinite contract with a variable rate (indexed each month).

Regarding electricity, you can also choose the source of your energy from the production facilities available to the supplier. There are currently three:

Do these renewable sources guarantee cheaper rates than those offered by other suppliers? The answer may vary from month to month as DATS 24 has chosen to offer variable rates. That is why it makes more sense to compare your rates on Energyprice.be to give you an idea of where this new local supplier sits in terms of price.

If you have questions about prices, changing supplier or moving house, please call 0800 37 369