Home › Blog › Energy market › Do the Walloons pay more for their electricity bills since 2009?

Do the Walloons pay more for their electricity bills since 2009? 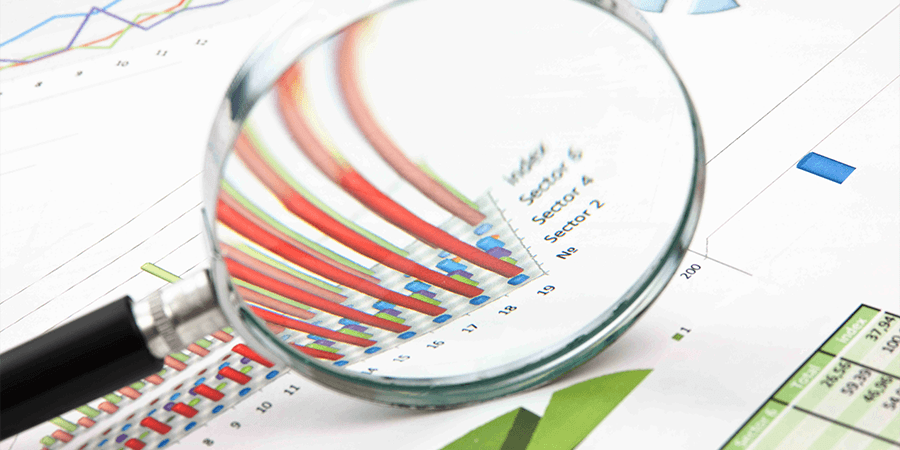 In Belgium, the price of electricity is a recurrent topic of discussion in the field of energy. So in your opinion, how has it changed over the last few years?

Market liberalization took place in 2007 in Wallonia, but in 2003 in Flanders, resulting in a radical change in the energy landscape in just a few years. It has in fact allowed the emergence of new energy businesses and the development of competition. Before liberalization, only Electrabel provided electricity in Belgium. Since then, a number of providers have flourished on the market: Luminus, Lampiris, Essent.be, Mega, Eneco, Poweo, Energie2030…

Since market liberalization, the total price of the electricity bill of a private consumer has increased. But what are the items that make the total amount mushroom year after year?

Through this article, you will learn how the different elements that make up your household electricity bill have changed: fixed charges, distribution system and transmission costs, miscellaneous contributions and unit prices of energy.

The electricity bill: what does it consist of?

To address the evolution of the price of the electricity bill, it is essential to know its different components. Here’s a quick recap:

Only the first component of the bill (energy and contribution to renewable energies) is subject to competition. In fact, the electricity suppliers are free to determine the price of their energy and the contribution to renewable energy. As for the other two components (the cost of the transmission and distribution systems as well as taxes and surcharges), the market is not liberalized. Consumers can therefore not choose their distribution and/or transmission system operator. We will see in the analysis below that this difference in terms of liberalization plays a crucial role in the evolution of the price of the energy bill.

How is the bill changing in Wallonia?

Our analysis focuses on the evolution of consumer energy bills based on the rates excluding VAT for Luminus (Actif+ product), between 2009 and 2016. The consumptions selected are those of an average three-person household in Wallonia, with a dual rate meter (day and night), distributed as follows: 1,600 kWh for day use day and 1,900 kWh for night use. 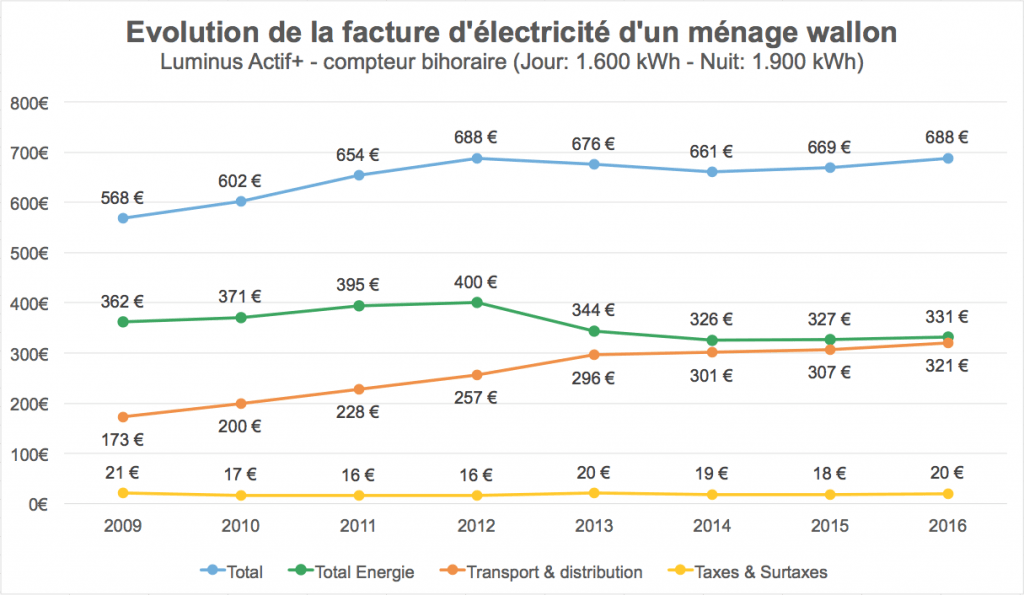 After a comprehensive analysis of the evolution of prices between 2009 and 2016, each component of the energy bill will be discussed separately and we will deal with prices in 2009 (two years after the liberalization of the Walloon energy market) and prices in 2016.

Between January 2007 and December 2015, CWaPE (Walloon Energy Commission) calculated an increase in the electricity bill of:

Consumers who switched suppliers benefit from more competitive rates than those who did not choose their supplier.

Now let us analyse the evolution of each component of the bill in greater detail.

Component related to energy costs and the contribution to renewable energies

Since 2009, the price of daytime of energy has decreased by about 24%. Gradually increasing between 2009 and 2012, daytime electricity rates have fallen steadily since 2012. For night time electricity rates, the trend is identical with an increase until 2012 and a decrease between 2012 and 2016. This decrease, however, is lower for the night rate, at around 9%. 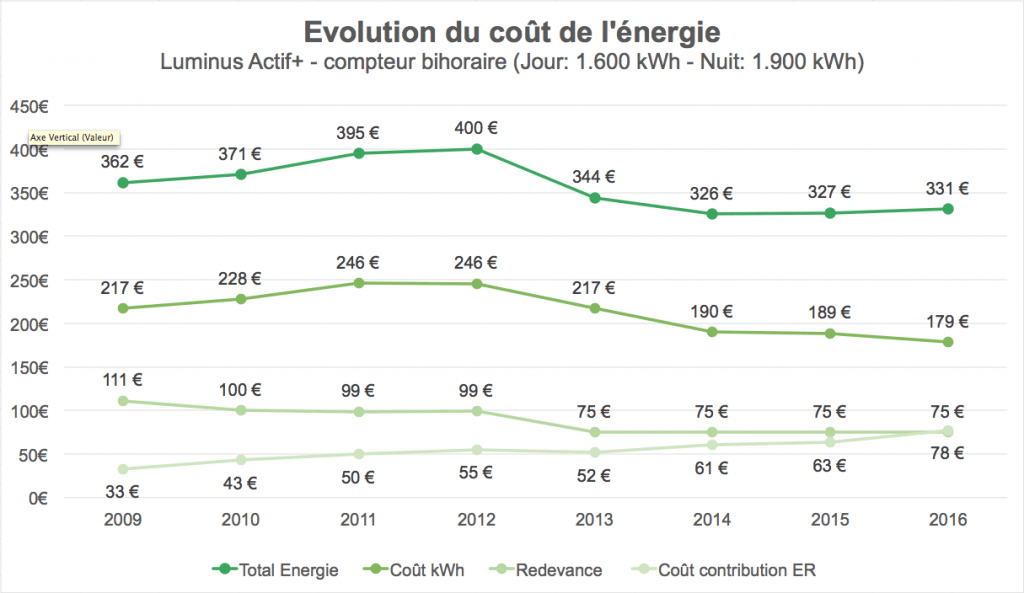 We should also take into account the fixed annual fee that varies greatly from one supplier to another. In our example, a fee was demanded for the dayand for the night until 2012. The fee currently stands at €75 excluding VAT whereas it was above €110 excluding VAT in 2009.

The contribution to renewable energies must also be considered. The Regions require all active electricity suppliers in their Region to provide a number of green certificates annually (which can be purchased from producers of electricity from renewable sources). These certificates represent a cost to the suppliers who then pass it on to the end customer.

Finally, VAT has also evolved over time. On 1 April 2014, VAT on electricity went from 21% to 6%. This decrease affected the energy component of the electricity bill. This federal measure was applied until 1 September 2015, when 21% VAT was restored. Consumers therefore obtained a temporary reduction during 17 months on the total amount of their electricity bill.

It is also noteworthy that this decrease is partly due to falling markets and wholesale electricity prices. 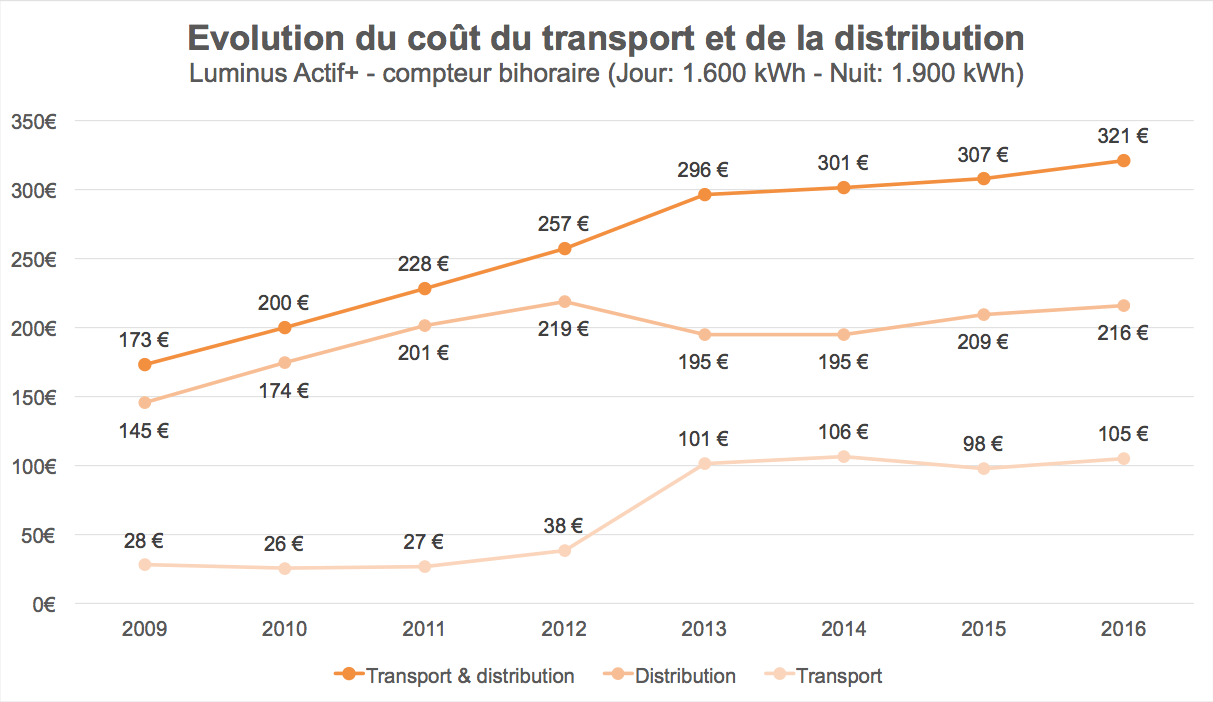 Component related to taxes and surcharges

The third and final component of your bill includes the taxes and surcharges imposed and established by the State and the Regions. Like the system costs, this amount was previously charged by the supplier, who in turn paid this amount to the State or the Regions. Regarding the federal contribution, we have performed the average of this amount, given the slight differences in the cost of this contribution according to the network operator.

Over the last seven years, there has been little change in terms of taxes and surcharges for consumers. Energy contribution costs have not increased since 2009, federal levies have decreased by 6%. As regards the regional contribution, the price is the same as in 2009. Generally speaking and for the average household analysed, the costs of taxes and surcharges have remained identical.

Has liberalization had a positive impact?

The liberalization of the energy market has had several impacts on the electricity bill. First, the suppliers, overall, have reduced the energy prices charged to consumers. This is the logical consequence of the emergence of competition as regards this specific part of the bill and the lower wholesale electricity prices in the markets.

Since liberalization, the amounts related to system costs have risen greatly, which to a large extent explains the always higher price of the total electricity bill. The consumer cannot, in fact, choose their system operators. The same goes for costs related to taxes and surcharges. These amounts are still much lower than those related to the networks.

To address this inflation, we recommended you make a comparison between the suppliers’ different rate cards (at least once a year) to choose the most suitable and competitive deal in relation to your consumption profile. Tools such as an energy price comparison website can help you choose the supplier that best suits you.