How is the electricity rate established?

The kilowatt hour (kWh) price is one of the key items of an electricity bill. But, why is it important? Are there different types? Energyprice.be can clarify this for you.

When talking about electricity consumption, you must talk about an estimated energy budget. This exercise will, of course, require taking your electricity needs into account, but also another factor: the price of electricity. The lower it is, the less money you will need to spend to receive the same number of kWh. Logical. However, some nuances might change the story.

What does an electricity bill consist of?

An electricity bill is divided into three parts, namely the price of the energy itself, the cost of transmission and distribution, and the amount of taxes and surcharges. The sum of the three makes up the total electricity price charged to the consumer. 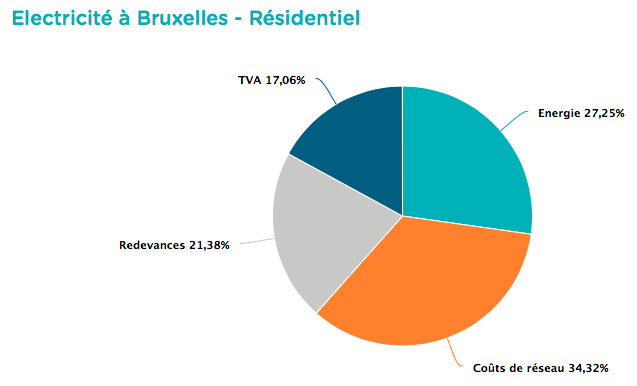 Items of an electricity bill in Brussels on 1 August 2017. Source: CREG.

The price of energy is freely set by the supplier, principally according to the wholesale market prices. It can therefore vary from one company to another. It includes the price of the kWh of electricity and the annual fee, also called annual subscription. In addition to the above are the costs incurred by the provider as part of its obligation to purchase green certificates and, in Flanders, of cogeneration certificates. Generally, this latter cost item is indicated on the bill under the title of ‘Contribution to renewable energy’ or ‘Green energy costs’ and, when applicable, ‘Cogeneration costs’.

2. The transmission and distribution tariffs

This item of the bill allows paying two energy market stakeholders: the electricity transmission system operator, i.e. Elia, and the distribution system operator (DSO) in the customer’s municipality. For your information, the DSO was formerly referred to as the “intercommunal company”.

Unlike the price of energy, transmission and distribution tariffs are non-negotiable and must be approved by the Commission de Régulation de l’Électricité et du Gaz (CREG – gas and electricity regulatory commission). However, they may vary from one region to another, depending on population density, as it will always be cheaper to supply electricity to a town or city than to rural areas.

This last item of invoice includes the amounts set by the federal State and the Regions. Since it is the supplier that handles billing, it retrieves the amounts due but then forwards them in full to the various authorities.

In summary, consumers have limited room for manoeuvre as they can only act on the price of energy, i.e., the part left to the discretion of the provider.

Different kWh prices depending on the type of electric meter

When establishing its rate plans, the electricity supplier must take one technical element into account: the electric meter. In Belgium, there are three main models: the standard, the dual and the night rate only meter. Each is associated with a specific electricity tariff and allows consumers to save money as long as they are used optimally.

This is especially true for the dual meter. With two indices, it distinguishes the times of the day according to two time periods: peak hours, corresponding to daytime during the week, and off-peak hours, corresponding to nights and weekends. The purpose? To encourage consumers to use their energy-consuming devices during off-peak hours in order to use the excess electricity produced at night in Belgium. To do so, the idea was to offer an attractive rate during this period.

Conversely, and this is where the problem lies if you are not aware of this factor, the dual daytime rate is higher than the single standard rate. Regarding the night rate only meter, used by most people who have electric storage heaters, it usually offers a price equal to that of the off-peak hours of the day/night system. Previously this was not the case.

Are you doubting between a standard and a dual meter? Before changing your electric meter, look at your habits and calculate your electricity consumption. If it is low, the standard rate will probably suit you best. If you have the slightest doubt as to which type of meter to install, you can call us on 0800 37 456 us or send us an e-mail to info@energyprice.be.

What to choose: a fixed or variable electricity price?

Most energy providers market several kinds of contracts. The consumer usually has the choice, for example, between a green electricity deal, a 100% web-based deal or a classic deal. But one criterion goes beyond these specifics: the type of electricity tariff. Fixed or variable, it influences not only the cost of the kWh and the annual fee but also the guarantee granted to the customer. 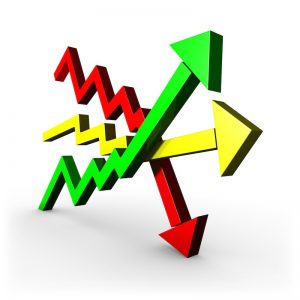 Indeed, a fixed rate ensures a flat rate price of the kWh of electricity throughout the duration of the energy supply contract. In exchange for this security, the suppliers often demand a higher annual subscription. A variable rate is indexed quarterly. Consumers usually discover if it has risen or fallen when they get their annual regularization bill. The risk is that if the price has increased, they must pay the difference, which may be substantial.

For your information, to avoid getting a big energy bill, it is generally recommended to choose a fixed rate for electricity and a fixed or a variable rate for natural gas. Gas is indeed subject to lower price fluctuations. However, this does not prevent the fact that the price of gas remains more attractive from some energy suppliers.

Two tips to discover the electricity tariff for you

It is easy to be overwhelmed by the huge number of electricity deals available on the market. Including all regions, there are 388 intended for professionals and households! There is therefore a risk of choosing one at random, but nothing could harm your wallet more. In fact, to make savings, you must take your needs into account before deciding which contract to subscribe to.

The financial aspect is, however, not the only criterion to determine which electricity supply deal to opt for. For example, it is just as important to check the provider’s commercial and environmental policies as they may be incompatible with your convictions. Explanations.

If what you want is to pay as little as possible, you should know that some rate plans will suit you better than others. Indeed, electricity contracts are specifically intended for families and offer a higher annual fee and a lower kWh price. Conversely, others are intended for people living alone and, because of their low consumption, are linked to an attractive annual subscription but higher electricity tariffs.

This specificity is in addition to other important criteria such as price (fixed or variable) as well as the conditions and the duration of the contract.

If you are unsure as to which energy deal to go for, the above might be the solution. Engie, Poweo, Octa+, Mega… They all offer electricity deals, but sometimes that’s where their similarity ends. To distinguish between them, different elements can be taken into account:

For your information, you are not under any obligation to choose the same supplier for electricity and gas.

Comparison of the cost of electricity in Flanders and Wallonia

To award a company the title of “best electricity company” is difficult, as everything depends on each individual’s own criteria. On the other hand, it is possible to find out which one offers the most attractive electricity price.

Below we set out the fixed rate flagship deals of the key electricity providers in Flanders and Wallonia.

Would you like to know which is the cheapest electricity deal among all of the ones on the market? Use our gas and electricity supplier comparison website certified by the CREG!

Comparison of the cost of electricity in Brussels

Among the major actors in the energy market, does a cheap electricity provider stand out?

Below we set out the variable rate flagship deals of the key gas and electric suppliers in Brussels.

The evolution of electricity prices in Belgium

In Belgium, the full liberalization of the energy market dates from 2007. Supposedly beneficial to consumers, it does not seem to have had the desired effect. In fact, according to the CREG, the total electricity bill of a private individual increased on average 69.51% between 2007 and 2016.

This can mainly be explained by the increase in renewable energy and cogeneration contributions, transmission and distribution tariffs as well as public levies and taxes.

*Dc is a residential customer consuming 3,500 kWh per year.

How to pay less?

With regard to what are sometimes unfavourable rate changes, comparing the rates charged by electricity and gas providers is highly recommended. The ideal situation is to find a low fixed price and take advantage of it for a long time. If this is not possible due to the current situation, the best thing is to benefit from attractive promotions and opt for another deal as soon your promotions end. Good news? Terminating an energy contract only takes a few minutes.

To take advantage of attractive rates often requires switching electricity supplier, as most reductions are reserved for new customers. But, do not worry: this procedure is quick and free, and moreover, we are here to support you. Simply contact us on 0800 37 456, from 9 am to 12:30 pm and from 1:30 pm to 5:30 pm.

In order to know the answer to your question, I invite you to contact your utility company.

Do not hesitate to contact our advisers at 0800/37.456 from Monday to Friday from 9am to 6pm to compare the different energy suppliers and save money.

Indeed, it is always possible to find better offers for you.