The price of gas: what are you really paying?

It’s essential to look closely at the details of your gas cost. Why? Because the amounts making up your bill reveal the areas that are costing you the most! The results might surprise you.

If you use natural gas to heat your home, cook or produce hot water, you must have signed up to a supply package. This is a simple and quick step, but it does require you to choose between the different gas suppliers in the Belgian market.

This is often where it gets complicated, because as well as high-quality customer service, customers are usually looking for a low price for a kilowatt-hour (kWh) of gas. All it takes is a visit to an energy supplier comparison website to compare gas tariffs. However, choosing a cheap energy package can still lead to high bills, even with low consumption. Explanations.

The components of a gas bill

A bill for natural gas, the fuel that has replaced coal gas, is divided into three main sections: the price per kWh of the gas itself, network costs and taxes. As a consumer, you thus pay several players in the gas market. The bad news? Some of these payments are imposed by the authorities. 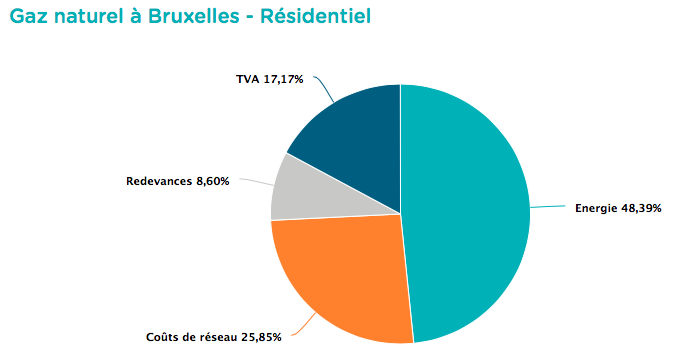 Components of a gas bill in Brussels on 1 August 2017. Source: CREG.

1. The energy price, or the natural gas price

The gas tariff is set by the energy supplier. For example, this might be Engie, Luminus, Lampiris or Essent, the companies who dominate the gas market in Wallonia. Alongside these giants, other suppliers such as Antargaz and Mega are trying to carve out a place for themselves.

In practice, the gas cost varies from one company to another, but also from one tariff to another. To identify the most attractive option, both of the elements that make up the price must be taken into account: the price per kilowatt-hour of the gas and the annual fee (also known as the standing charge). This subtle distinction is important, because the unit kWh price could be very low but the annual fee very high. The advantages of the tariff may thus be wiped out, depending on your gas consumption.

2. Network costs, the prices of distribution and transport

The second part of the gas bill relates to network costs. First there are the activities of Fluxys, the high-pressure transmission system operator (TSO). Its role includes supplying natural gas to industrial consumers and distribution system operators (DSOs), who manage low- and medium-pressure gas pipework between the Fluxys infrastructure and home users.

Fluxys and the DSOs have a monopoly over the territory in which they operate. This means all of Belgium for Fluxys, and a defined region for each DSO. Consequently, consumers cannot escape the prices they charge or choose a different manager in order to pay less. Don’t know the DSO for your town or village? Use our search tool!

3. Taxes levied by the authorities

If you take a look at your bill, you will see a number of different energy taxes. These include VAT, the energy contribution and the federal contribution, together with the surcharges levied by the regions.

This element of the bill is thus independent of the natural gas supplier, but the supplier, acting as the billing operator, receives the sums payable and passes them on to the relevant bodies.

Billing in kWh with a meter in m³

Your gas supplier prepares your bill based on the kilowatt-hours you have consumed. This is why supply companies’ comparison tables indicate gas costs per kWh. But your gas meter indicates the gas delivered in cubic metres (m³). Why the difference?

The initial aim is for each household to pay for the energy actually received rather than a quantity of fuel. To achieve this, the calorific value of a m³ of natural gas is expressed in kWh. The DSOs then calculate a conversion rate based on three criteria:

Once the conversion rate has been determined, it is multiplied by the volume of gas measured by your meter. To produce your bill, the supplier then multiplies this result by the gas cost per kilowatt-hour indicated in your supply contract. As a guide, the average energy value of 1 m3 of gas corresponds to 10 kWh.

Should you choose a variable or fixed gas price?

By opting for a fixed price, you can be sure your gas cost will remain the same throughout the term of your contract. The advantage is obvious: this provides considerable peace of mind and bills that are easier to understand. Conversely, variable prices change regularly as the market evolves.

Suppliers currently use quarterly indexing based on set parameters, but from January 2018 they will be able to choose parameters freely and indexing will be monthly. This new indexing system will thus make it harder to compare energy prices. However, gas has an advantage over electricity – natural gas rates fluctuate less widely. So choosing a variable-price gas contract does not automatically mean large price rises.

Whichever type of contract you choose, it is vital to choose your gas supplier carefully. Not only to keep gas costs as low as possible, but also to benefit from efficient customer service. Need help to find out which supplier is the best match for your criteria and your gas consumption? Don’t hesitate to call our advisors on 0800 37 456 or contact them by e-mail (info@energyprice.be).

Comparison of gas costs in Flanders and Wallonia

Which is the cheapest gas supplier? To find out, here are the headline fixed-price deals offered by the five main suppliers.

Comparison of gas costs in Brussels

Finding a cheap gas supplier in Brussels is possible! All you need to do is compare gas prices. Here are the headline variable-price deals offered by the five main suppliers.

The evolution of the kWh gas price in Belgium

Since 2007, the energy market has been liberalised throughout Belgium. Promising to cut gas and electricity costs, has the process lived up to expectations? To find out, CREG, the federal regulator, conducted a study of how the natural gas price component of consumers’ bills has evolved. The study shows that the energy component of the gas price had fallen by an average of 16% by the end of 2016 compared with 2007 prices.

*T2 is a domestic customer.

Is this downward trend continuing even where monopolies are still in place? In terms of the distribution system price, the answer is no. CREG reports an average rise of 34% between 2007 and 2016. The figure is highest in Wallonia (+69%), due partly to the increase in the rate of the public service obligations (OSP) and extensions to the network. The difference with Flanders is striking – the average rise there is only 17%.

In both Wallonia and Flanders, the public service obligations raise funds to install pre-paid meters and manage vulnerable customers. Except that in the south of the country, the costs of these card meters have skyrocketed.

More globally, across all bill components, the total gas price climbed by 2.50% between January 2007 and December 2016.

How can you reduce your gas bill?

Even when prices are falling, it is important to compare gas prices at least once a year. Why? Because the promotions reserved for new customers are only valid for this length of time, and these discounts often enable significant savings to be made.

If the idea of an annual comparison is off-putting, don’t worry: changing gas supplier only takes a few minutes and the new company will carry out all the formalities for you. What’s more, it’s free! Sounds too good to be true? If you have any doubts, talk to our staff, who can be reached on 0800 37 456 from 9 am to 12.30 pm and 1.30 to 5.30 pm. They will answer all your questions and do everything possible to end big gas bills for good – and that’s a promise!